Despite ongoing efforts by members of the public to convince governments, businesses, and consumers to reduce their contributions to climate change, the crisis continues. Recent climate change protests, while in good spirit, have had no measurable effect on greenhouse gas emissions. No-one wants to sacrifice their own lifestyles if they don’t have to — their actions alone don’t change anything, so what would be the point — and even during the middle of pandemic-induced lockdowns, carbon dioxide levels reached 418 parts per million in May this year. That was the highest concentration ever recorded in human history, and “likely higher than at any point in the last three million years”, according to National Geographic, the well-known non-profit organisation that “uses the power of science, exploration, education and storytelling to illuminate and protect the wonder of our world”. At this rate, climate change won’t be stopped effectively — something else needs to be done.

The UN’s Intergovernmental Panel on Climate Change (IPCC) states that in order to limit climate temperature rises to 1.5℃ by 2050, the world will have to reach almost zero net carbon emissions – this means that yearly emissions should be 45% lower than 2010 levels by 2030. What happens if this doesn’t happen isn’t pretty: Floods, extinction, and increased poverty. Ocean acidification, loss of habitable land, and food insecurity. Extreme drought, deadly weather and melting continents.  All these things become extremely high risks if we don’t reduce emissions by the amount specified. The IPCC’s report cites 27 A4 pages of scientific sources in the chapter detailing these effects – this is real. We need to try something new to change the course of the future.

Businesses and many individuals prioritize money over all else, which is part of the reason why we have laws – to protect everyone from dangerous actions being done for money. Why, then, is an issue as big as this being ignored? At the moment, power companies, factories, farms, transport companies, and most other businesses still output greenhouse gasses without restriction. Our own Australian Government has no legal penalties for emissions – just a financial incentive for companies to get greener (the Emissions Reduction Fund), which is becoming less and less effective over the years, according to the government’s own news service:

It’s clear that asking people to change their behaviour and offering financial support is simply not enough. Even with much of the world shutting down due to COVID-19, daily global emissions reduced by only 17% less than 2019’s for a few months (as asserted by National geographic in the same page linked above), which is nowhere near the necessary reductions.

Australia moved in the right direction in 2011 with the introduction of the “carbon tax”, which increased the prices of products that released carbon dioxide and other greenhouse gasses into the atmosphere. According to a study conducted at the Australian National University, which investigated global emission trends in 142 different countries, emissions decreased by 2% in countries with carbon taxes between 2007-2017. It rose by 3% in other countries. Unfortunately, former Prime Minister Tony Abbott abolished the tax in 2014 – making Australia the first country to abolish such a tax.

The rejection of the carbon tax was mainly due to monetary inconveniences. Tony Abbott claimed that abolishing the tax would save the average Australian taxpayer $550 per year, which was questioned by the government-funded ABC News – and actually ended up to be around $100 – $200 saved instead when fact-checked by the ABC two years later.

Was saving $150 / year worth increasing average greenhouse gas emissions by 5% in just ten years? That 5% is just about a third of the average emissions reduced when the whole world shut down this year, and, as we now know, over an eighth of the IPCC’s target 2030 reductions. That’s a significant amount. It doesn’t make sense to put the lives of yourself, others (especially those close to poverty), and the whole human race in general in danger just to save $150 / year. That’s a pretty fair price for literally saving the world.

As well as discouraging the consumption of harmful products with taxes, legislation can be made to force cities to reduce emissions. According to National Geographic and the Climate Action Tracker organization, an independent scientific analysis that studies actions taken by governments to reduce their impact on climate change (and measures those actions against the globally accepted Paris Agreement), with highly documented and trusted methodology, the two closest countries to meeting their 2016 emission goals are The Gambia and Morocco. It’s no coincidence that these two countries have both made switching to renewable sources of energy their main method of achieving those goals. 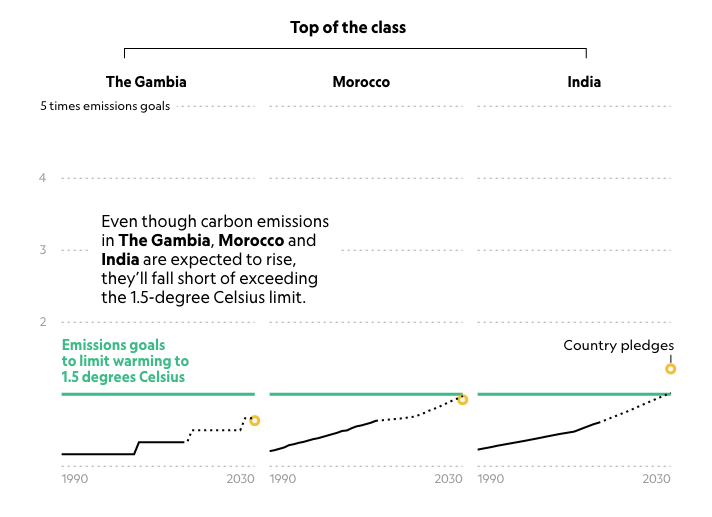 We need laws like the carbon tax back, as well as hard restrictions on greenhouse gas emissions like they’ve worked towards in The Gambia and Morocco. These systems work. Together, we can push for these laws.

As well as introducing new laws, companies that worsen climate change can be made responsible for their crimes.

Suing companies for contributing to climate change may at first sound ludicrous – after all, what exactly are you suing them for? Emitting greenhouse gasses and the like doesn’t seem to break any single direct laws. It is possible though, and it’s been done before. For example, there’s the ClientEarth organisation – an environmental law charity dedicated to the task of using law to fight climate change. While there’s definitely not enough existing legislation yet to effectively stop climate change, there’s enough to sue corporations for certain reasons. ClientEarth have used law to save a world heritage forest in Poland, blocked the construction of a 1.6 giga-watt coal power plant, sued German authorities for ignoring dangerous air pollution, and make many other good changes worldwide. It’s great that all this is being fought – but it’s not enough. This issue will affect everyone, everywhere, including you. The small number of environmental charities won’t do enough alone – we need everyone to push for businesses to be punished for killing our species.

The future looks bleak, but we can help change its course. New laws like the carbon tax, hard restrictions on carbon emissions from businesses, and cleaner energy generation plans are crucial. Incessant lawsuits against offending companies are necessary to enforce new and existing policies. If we push for these legal changes as a country, we can do our part in making it better.